Every day, scientists are making new discoveries about dinosaurs. The amazing idea is that even though dinosaurs haven’t been around for millions of years, we can still learn a lot about them. A more recent discovery is that scientists may have found out how to tell what colors all the dinosaurs were made up of, or if they had fur or feathers. 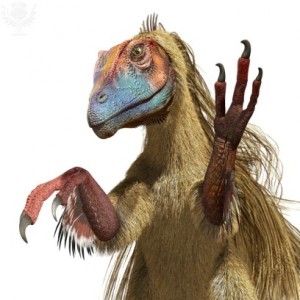 Being able to tell what colors the different dinosaurs were made up of can also tell a lot about the environment they lived in. Intriguing scientists, is the fact that animals use their coloring as warning signals, camouflage, and attracting mates, all ways of communication. If they knew the colors of all the dinosaurs, they could figure out how they communicated with one another and get a better idea of what their environments could have looked like. Of course, being able to figure out the all colors is a very complicated process in itself.

ll started when looking at a fossilized feather, the researchers found fossilized melanosomes, or pigment-bearing organelles, which can be found in skin, hair, and feather cells. Although, the color of the original melanosome degrades over the years, the size, shape and order can give clues as to what their original color was. Although it would be hard to recreate the exact color the dinos used to be, they can have a good idea of what they might have looked like. With these findings, many scientists want to argue that the melanosomes found on dinosaur bones that were not birds, could mean that those dinosaurs were actually fuzzy, or had a light fur on them.  However, many researchers have their own opinions to the situation.

Some scientists feel that the process of getting fossilized, intense pressure and heat, could have distorted the melanosomes into different shapes and sizes. In studies done in the lab, after running a test fossilization some of the color cells disappeared, or warped into others, making it hard to tell which was which. So, instead of having a debate over if dinosaurs had feathers over fur, the question is did they even have either?

Until more studies are done, we may never know exactly how these dinosaurs really looked. Some could have had light fuzz to a body full of feathers. Once we do get this information though, we will be able to know how the dinosaurs communicated with one another and how they adapted in their environment. Who knows, maybe the answer is just around the corner.

Do fossils tell us other things about the appearance of dinosaurs?

Can dinosaurs have feathers, but not fly?

What colors were most commonly found on these dinosaurs?